Feeds are a type of integration that allow a third party service to forward event data to an mParticle workspace. Feeds can supplement data collected directly from your app platforms—via mParticle’s SDKs or Events API—with additional data available only from an external source.

Data available from feeds may include:

When planning a feed implementation, it is important to consider if and how you want the data to be forwarded to any event outputs. Event integrations connect an ‘input’, which is a single platform or feed, to a single ‘output’.

Act-as feeds are feeds which mParticle can treat as if they belonged to a single platform. For example, if a feed can “act as” iOS, you can connect the feed to any output that accepts data from the iOS platform.

When you configure an act-as feed, you will need to select the platform you want the feed to act as: 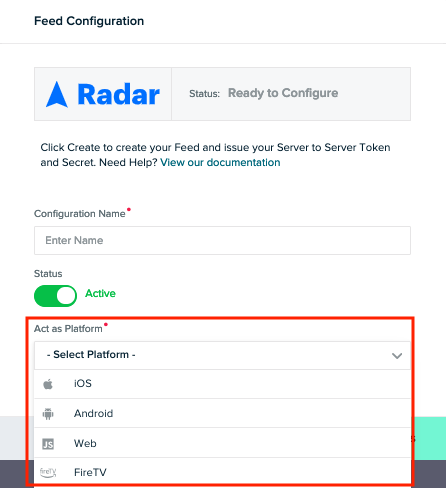 You can connect an act-as feed to any output that can support the platform it is configured to act as.

Note that for act-as feeds, if you wish to capture data for multiple platforms, you will need to configure multiple instances of the feed — one for each platform.

If you do not see an option to select an “act-as” platform when you configure a feed, the data from that feed is treated as “unbound”: not tied to a particular platform. For example, a feed that forwards data about user actions in response to an email campaign will be an unbound feed. These events don’t specifically belong to a platform, like iOS or Android, and won’t have the necessary identifiers to be processed as iOS or Android events.

Outputs that only support iOS / Android / Web will not accept data from unbound feeds. However:

Was this page helpful?